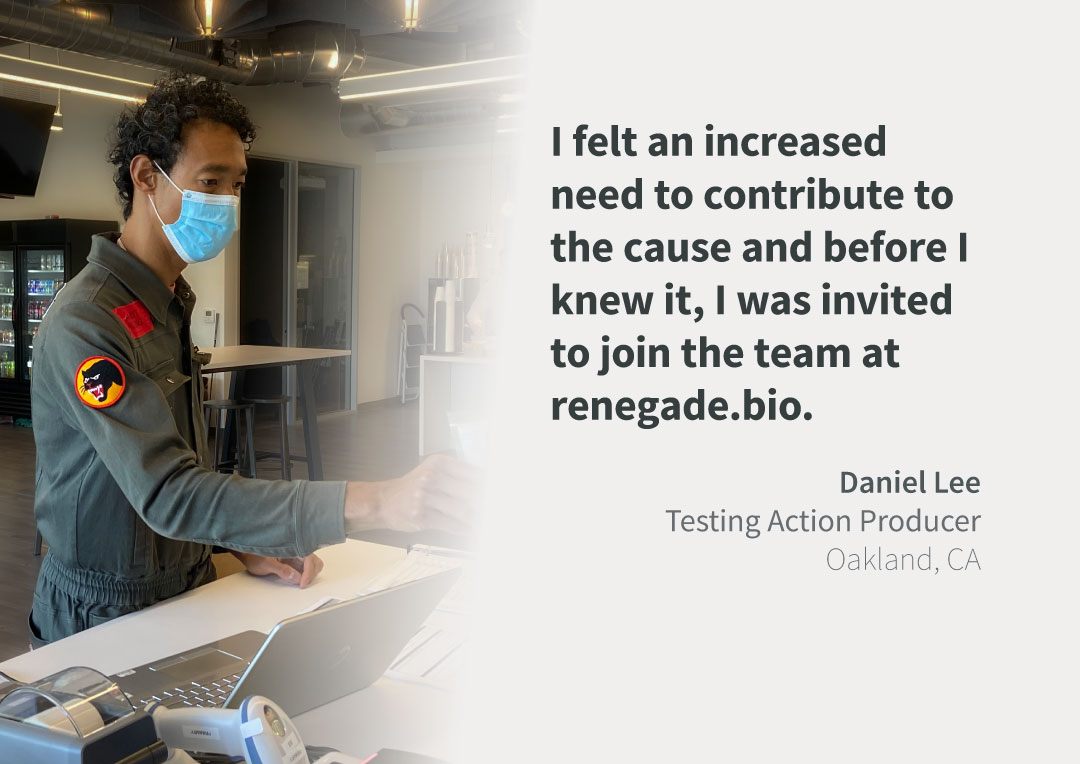 Cool, calm and collected is the best way to describe Daniel Lee, renegade.bio’s Testing Action Producer.  Daniel, one of the key personnel hired when the company was less than a month old, leads site management for testing and logistics in the San Francisco Bay Area.

The key to renegade.bio’s success has been quickly mobilizing a diverse and accomplished team to meet the growing demands for SARS-CoV-2 testing. From the early days of scouting for our Oakland lab and subsequent CLIA license application, Daniel has been able to hit the ground running and adapt to the Next Normal helping the company respond rapidly to the growing Coronavirus crisis.

Prior to joining the renegade team Daniel was a location scout for the San Francisco film industry, “I was in the "wrapping stages" of a mega-blockbuster Hollywood movie that was filmed in San Francisco.  For a month, I worked from home, tying up all the loose ends on the movie.” Having studied film at the Academy of Art in San Francisco he was heavily ensconced in the local film world when things shut down overnight. Known for his organizational and operational talents, together with an ability to avoid chaos and problem solve, he saw an opportunity to participate and help make a difference.

“Some friends say they've never seen my feathers ruffled, always see me remaining calm, and that I’ve always been very firm and direct when communicating during high-stress moments. With those compliments, I felt an increased need to contribute to the cause and before I knew it, I was invited to join the team at renegade.bio.”

The team hails from diverse backgrounds and Daniel is no exception. The second youngest of four, he was born in NYC into a bi-racial family. His mother is  African American and his father is Chinese. His father is a minister and missionary, and his mother a fashion stylist who once worked at Essence magazine; they met in a Harlem church.  Though he comes from a family of artists and creatives, he also has a great sense of community, social justice,  and commentary. “My mom was born in Oakland and a member of the Black Panthers back in the 70’s. She told us stories of how they began the school breakfast programs, bussing kids to school and feeding them before class. It’s a side of the organization that’s not as well known.” His mom now teaches college on the East coast but often comes out to visit during the year.

Daniel headed up the management of the company’s first community testing at “Pride is a Riot” in San Francisco on June 28th. Upcoming operations  will involve initiation of weekly testing at the company’s Oakland facility for the local community. He also provides operational direction for on-site employee testing for the business community.

When he’s not working on his own movie project, Daniel is known to participate in the local karaoke scene. Unfortunately, that’s on hold right now as bars are closed during the shutdown, but he continues to practice his repertoire while working, oftentimes belting out a song or two when he thinks nobody is around. We are all looking forward to the day when the team can get together and join him at his favorite local karaoke spot in San Francisco, The Mint Lounge.

Want to become a renegade? View our latest job postings.