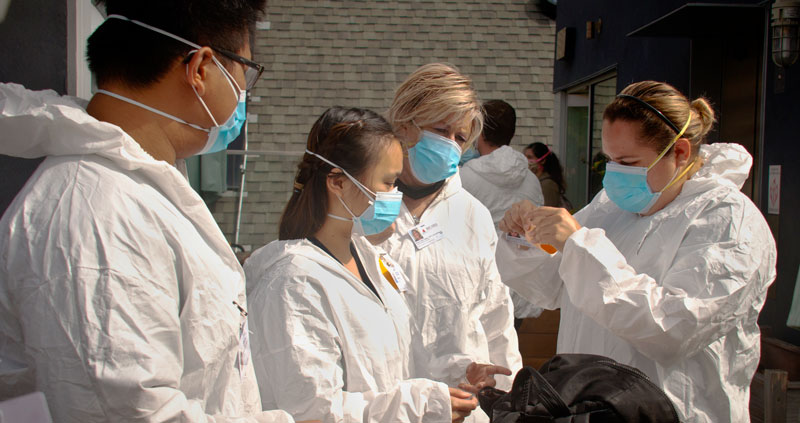 When renegade.bio held its first no-cost COVID-19 testing at San Francisco’s Pride Is a Riot rally in Dolores Park in June 2020, our goal was to provide a resource to underserved communities in the Bay Area to ensure equitable access to COVID-19 testing for disease prevention.

Data collected from that event showed 44 percent of the people we tested never had a COVID-19 test before. We considered that a measure of success. But the majority of those tested were white and had received a COVID-19 test prior to our event. While we reached some of the communities we set out to assist, such as the LGBTQ+ community, we hadn’t reached others, such as people of color, the unhoused and other disenfranchised populations.

This was a turning point for us. We realized we needed to identify and address not only traditional barriers to access to care for marginalized communities — such as income, socioeconomic status, access to technology and transportation — but more complex barriers such as deep-seeded mistrust, disenfranchisement and a lack of healthcare education.

In response, we reached out to the California Department of Health as well as community based organizations that are deeply embedded and trusted sources among underserved communities to better understand how we could meet the communities’ needs. This proved vital to our understanding. For example, when we learned from our partner Umoja Health that Black communities were skeptical of nasal swabs, we offered to collect test samples through saliva. Meeting the community where it was at resulted in increased trust and participation, and ultimately better health outcomes.

This approach to develop strategic community partnerships has shaped our mission as a public benefit corporation that steps beyond the function of a laboratory and travels the entire journey of access, education, testing and treatment with those we serve. It informs where we set up our collection sites and where we’ll set up future labs as well. When we hear of communities with limited to no access to testing, we reach out, just as we did with Alameda, California, where we established our most recent COVID-19 testing site.

But everyone needs access to testing, regardless of income and socioeconomic status. Our agility and ability to quickly adapt to meet the unique needs of communities has enabled us to serve an incredibly diverse population from underserved communities to members of the United Nations who needed a time-sensitive, customized testing solution. As COVID-19 testing slows, we’re using our experience and knowledge learned during the pandemic to expand our clinical diagnostics to multi-panel testing. Due to the pandemic, the field of clinical diagnostics — an antiquated industry — is undergoing a revolution as new methodologies make it possible to develop widely accessible, rapid, accurate, low-cost testing solutions that inform medical decision-making in a timely manner.

How do we select which tests we develop? We look at where there’s a lack of attention — specifically among underserved communities — and how we can bridge the gap between science and healthcare education through community partnerships to empower change. We see reproductive and sexual health as one area of healthcare that urgently needs attention.

In the near future we plan to release our rapid, low-cost preeclampsia test and expand access through partnerships with targeted community-based organizations to reach the most diverse populations that need access to this early diagnostic test. In 2021, the Biden Administration announced its plans to “address the maternal mortality and morbidity crisis as a key priority,” and direct $3 billion toward the effort as part of the Build Back Better Act. The  administration also noted “rates are among the highest in the developed world, and they are especially high among Black women and Native American women, regardless of their income or education levels.”

An in-depth understanding of the populations we serve also informs the development of our tests. We can tune the algorithms of our assays to target specific biomarkers of the population being tested, for example, Black women, to calculate the corresponding disease risk. Not only do we offer a test that can help women understand their pregnancies more completely, we’re making it accessible the same way we brought COVID-19 testing to our community, which has the potential to impact a large segment of the U.S. population.

Early diagnostics coupled with community outreach among underserved communities can support this initiative. We have the capacity to educate populations that have a high propensity to transmit HIV. This includes sex workers, unhoused populations, users of IV drugs and communities that traditionally do not discuss sexually transmitted diseases. Diagnostics and education helps individuals understand what it means for them and what they can do to stay safe.

It’s our goal to make accessible testing mainstream nationwide. We believe the key to expanding that reach is through community partnerships and commitments to communities. To support that, we plan to open additional laboratories in the Midwest and the East Coast in 2023 to serve underrepresented populations that lack access to care and health education.

While the opportunities are ripe for emerging diagnostics to shape new standards of access to care, the role of state and federal government cannot be understated. As an organization, we continue to lobby for legislation that supports not only the rapid development of clinical diagnostics, but the inclusion of these tests as fundamental health care for all, as well as the funding to support them.